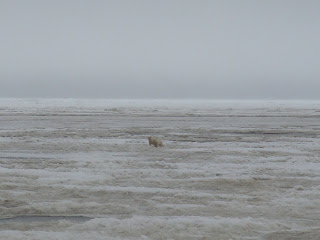 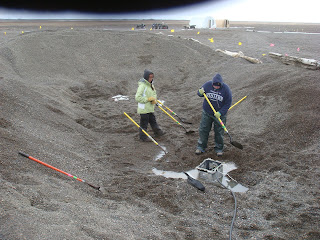 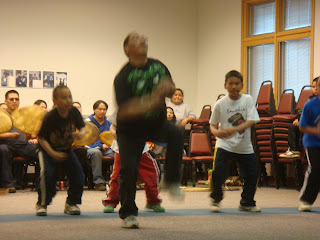 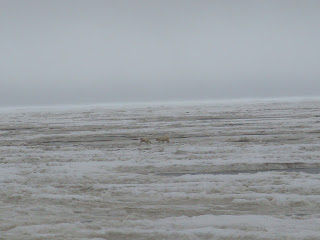 The week has been exceptionally cold and windy--the temperature is fine in the low to mid 30's but the wind is always in the 25-35MPH range which brings your actual working temp down around 0-5-10 degrees. We've been working at the driftwood feature and the huge trench the bulldozer dug for us--The dozer took it down 1M where it hit permafrost, we've been waiting fopr the melt and have been pumping it out with a sump pump taped inside a milk carton and covered with window screen to keep the gravel out. The pump does not have enough hose to get it over the berm and into the ocean so we pump it into buckets and carry them up the gravel ramp and 40' to the ocean. We've pumped out about a foot of permafrost roughly about 2,000 gallons. We need to get down another 1/2 meter to hit the drift line wood level that we are looking for. We pretty much hit it today and we ( the high school kids and myself, who now think of ourselves as the "Trench People" were happily working away in our little 50 cm X 50 cm patches when Perry, the bear guard who was standing right in back of the trench screamed, BEAR!,BEAR!, BEAR! MOVE,MOVE,MOVE!. We exploded out of the trench like a covey of quail going in all directions. The bear(s), a mom and a 2 year old cub were coming right toward us but 100 years or better out on the ice. All of us thought the bear was like, 30 yards away and charging because of Perry's attitude. I got some decent pictures of them and there were 2 others, both males who showed up later. Click on the pictures and they will magnify right up. We were downwind of them so they knew we were there but didn't know what we were. They angled over to the bone pile, and the other large male that was headed our way angles over to our East. Anne said this was the first toime they actually had to stop work to deal with the bears.
Earlier in the week, Tuesday, I think, Flora, a junior, invited us to a rehersal of their Eskimo dance. Four of us went and stayed for 2 hours, the drummers were very very neat. I'll post some pictures of them. The men drum and sing/chant in Inupiat, the women dance and they move their hands but their feet stay stationary. Very much like Hawaiian but no hip movement. The men apparently dance, but that night there was only one showing the young boys how to dance. They were like, 6-8. The chanting and drumming can get hypnotic but the songs are fairly short. When you look at the pictures, the drums are struck from underneath and the end of the drumstich actually hits the rim and the middle of the drumstick actually hits the middle of the drum. I couldn't tell what the drums were made of so I asked--The outer membrane of the Bowhead Whale liver. Who knew?? They also lubricate it every once in a while with some sort of viscous fluid in a styroform cup but I didn't find out what that was.
For those of you who asked, Yes I am actually working on my project, but mainly on the weekends and on parts of the discussion section on basketry and cordage.
Posted by Dave Grant at 9:39 PM