Day 15 --beautiful weather and eight Bears at the point!! 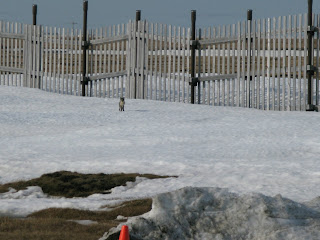 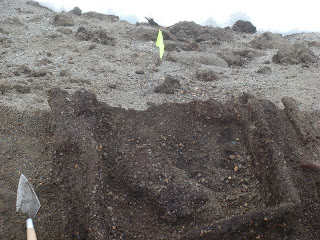 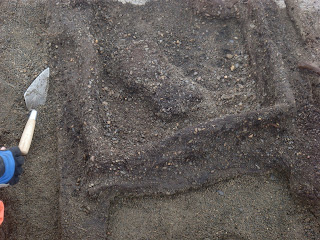 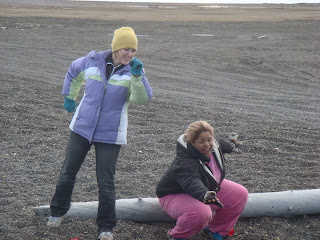 Today was great weather, cold but clear and sunny. When we got to the point this morning there was a mother bear and three cubs which is really rare, sometimes they have two but 3 is really unusual because it takes so much more work to feed the extra(s) there was 2 bears on the bonepile and some idiot in a pickup was parked there and through the bionoculars when the bigger bear passed in front of the pickup he came up to the middle of the windshield, so he was pretty big, there was also a smaller bear on the bonepile and Perry and Miles ( the bearguards) claim they saw two more but I did not personally see them so I can only claim 6. The unfortunate part was they were all so far away that there was no possibility of pictures. We went over to the bonepile at lunch thinking we might find one but not today. Tomorrow we get some heavy equipment coming out to try to remove some of the overburden from the Ipitak area, which is showing more wood coming out of the bluff. The weekend kinda sucked the weather was cold and foggy, I rented Vasha's ATV from her and took two trips out to the point ferrying a couple of the San Diego State University kids out so they could say that they had stood at the northernmost point in the continental United States, also to look for Bears and bear tracks, we found 3-4 sets of tracks but no bears. It really is a shame they come all this way to do research and can't get to use an ATV to go the last 9 miles to the point because of the safety restrictions.
With the pictures this time is a shot of an Arctic Fox that was hunting by the fence at the lab if you click on it and enlarge it's really pretty decent, a shot of Tiana and Vasha because the begged to be put in, and a couple of shots of a wood feature that was a grave but the remains are probably down the bluff. Saturday there was a party at my old hut, 268, and there are no libations left anywhere in NARL.
that all for this rendition, more to come.
Posted by Dave Grant at 10:03 PM

Oh, what a lovely picture of Vasha and I...

Though I am not one hundered percent sure why we were doing that... maybe an STP was falling in? Or were we just posing for the camera?

I think the second one would be correct. :)